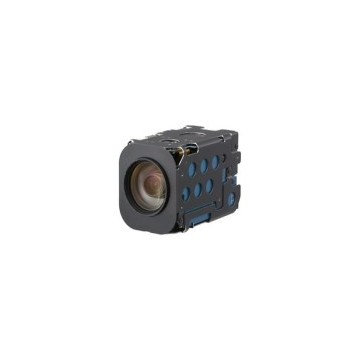 Sonys FCB Series of colour block cameras offers excellent picture quality, superb flexibility, and easy operation in a variety of applications ranging from surveillance to traffic monitoring, and in many other visual communication environments.

Sony’s FCB Series of colour block cameras offers excellent picture quality, superb flexibility, and easy operation in a variety of applications ranging from surveillance to traffic monitoring, and in many other visual communication environments.

Sony’s FCB Series of colour block cameras are specifically designed to be integrated into security domes/cameras, police vehicles, photo booths, document stands, and low-vision systems. There are ten cameras in the FCB-EX Series line-up, and each incorporates a wide variety of optical zoom lenses ranging from 10x to 36x. With this breadth of choice, it’s never been easier to select the right camera for your specific monitoring applications.

Thanks to this new technology, users can capture clear images even in extreme high-contrast lighting environments.
The cameras capture the same image twice: first with a normal shutter speed, and then with a high shutter speed. The dark areas captured at normal shutter speed and the bright areas captured at high shutter speed are then combined into one image using an advanced DSP LSI, thus clearly reproducing the original scene.
High-resolution Images
These cameras combine a Sony original DSP with a 1/4-type EXview HAD CCD®. They achieve a high horizontal resolution of 530 TV lines, enabling reproduction of amazingly clear and detailed images.
High-sensitivity Images
All the cameras in the FCB-EX Series deliver exceptional picture quality thanks to Sony’s advanced CCD technology. They provide excellent sensitivity and low smear levels.
Auto IR-cut Filter Removal (Auto ICR)
The Auto ICR function incorporated in these cameras offers optimal sensitivity in both day- and night-shooting applications.
At a set level of darkness, the IR-cut filter is automatically disabled (ICR ON ) and the infrared sensitivity is increased. Moreover, when ICR is ON , the camera adjusts to the optimal focal point. At a set level of brightness, the filter is automatically enabled (ICR OFF).
The IR-cut filter automatically engages depending on the ambient light, allowing the camera 24/7 operation in a variety of lighting conditions.
Advanced Spherical Privacy Zone Masking
With these cameras, a maximum of eight masking areas can be displayed on the monitoring screen. Also, if these block cameras are incorporated into a Pan/Tilt/Zoom (P/T/Z) camera system, masked areas are interlocked with P/T/Z movement, regardless of the camera angle or camera movement. Up to 24 masking areas can be preset in the entire viewing range of a P/T/Z camera. Moreover, FCB-EX Series D version cameras can mask unwanted or prohibited areas within an image using a mosaic effect on top of the colour masking function.
Electronic Flip (e-Flip)
All the cameras in the FCB-EX Series have an e-Flip function that electronically flips an image upside down so that it is displayed on the monitor accurately. In a dome application, for example, if a tracked object moves beneath the camera dome, the image is inverted to maintain the correct orientation.
Slow AE Response Function
All of the cameras in the FCB-EX Series are equipped with a Slow AE response function to automatically slow the rate at which camera exposure levels change. The rate can be set up to 32 times slower than when Full-auto AE or Priority (shutter/ iris) modes are selected. This function is beneficial when monitoring areas in which lighting conditions change abruptly such as underground parking lots.
Multi-line On-screen Display
With these cameras, up to eleven lines with 20 characters per line can be displayed on the monitoring screen using VISCA commands. Users can freely display captions on the screen such as the monitoring location, camera name, and alarm messages, providing operators with a user-friendly interface.
Video Motion Detection
These cameras incorporate a video motion detection function. When motion is detected within an area of the picture designated by the user, an alarm signal is output via the camera’s control interface using the VISCA protocol. Users can designate up to four detecting areas freely from any of eight vertical and twelve horizontal blocks.
Picture Freeze
All of the cameras in the FCB-EX Series are equipped with a Picture Freeze function that allows for the output of a still image while the camera is panning, tilting, zooming, focusing, initializing the lens, or performing preset operations. For example, the camera will output a still image before it begins to pan, tilt, or zoom, and once the operation is completed, the camera continues to display images that are currently being monitored. In this way, unnecessary images are not displayed.
SMART (Sony Modular Automatic Lens Reset Technology) Lens Control

All of the cameras in the FCB-EX Series feature this function. Each incorporates SMA RT Lens Control technology, which monitors the focus position of the lens while zooming, and automatically compensates for any mechanical misalignment that may occur over long periods of continuous usage. With this beneficial feature, periodic lens initialization is no longer required during continuous 24-hour operation.

12 other products in the same category :